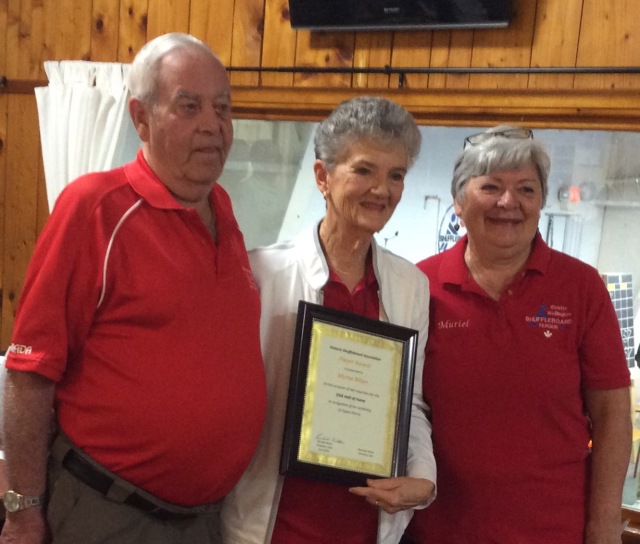 Myrna Bilton was indicted into the Ontario Shuffleboard Association Hall Of Fame – P;ayer Category, in a ceremony held at the site of the OSA Doubles Tournament in Elora, June 14, 2017. Muriel Burnett did the presentation as follows:

Today, it is my honour and privilege to present Myrna Bilton for the Induction into the Ontario Shuffleboard Hall of Fame, Player’s Category Award.

We are extremely privileged, because standing before you is the International Shuffleboard Association, President. Myrna is the greatest promoter of shuffleboard you will ever meet.  In fact most of us here, myself included took up this wonderful game, at Myrna’s encouragement.

Myrna was introduced to shuffleboard by her father in the 1970s. I can honestly say Myrna, “Clifford is proud of you today”.  From 2001-2017, Myrna has supported and participated the park league of Lazy Days in North Fort Myers. She has taught new shufflers, and helped start a second park league, when there were too many players for our league.  A problem, most parks can only dream of.

Her competitive shuffleboard started in 2007 when she visited the ISA Tournament taking place in Midland.  She met Lorraine Pollock, and learned how to be chosen to participate, and, she brought a ton of friends with her. Myrna and Rendall went to the ISA tournament in Australia in 2008.  As an amazing ambassador of Canada, she received the Sports Merit Award  –  on her first ISA tournament!  2008 she got her first OSA point with her husband Rendall, playing in Coldwater.

She was a co-founder of the Centre Wellington Club which opened in 2009. This busy woman is still actively emailing reminders to members, and sending promotions to the local paper.  That’s Myrna first and foremost – promoting shuffleboard.

In 2009, she also played in the ISA Singles in Betmar Florida.  2009-2016 she served as a director of Lee County Shuffleboard Club in Florida.  Again, she taught new players to play the game.  2009 she played on Team Ontario at the Inter Provincial in Coldwater, Ontario.

2010 Myrna was captain of the ISA Ladies Team Canada in Germany.  They placed first.  That year, she took on the responsibility of CNSA secretary.

2011 Myrna played in the ISA Singles in Dieppe NB, and was part of a delegation that travelled to Russia.

2012-2014 Myrna served as CNSA President.  2012 she was Captain of the Ladies Team who placed first in the ISA Seattle tournament.

2013 Myrna played at the St. Pete’s ISA singles and was part of the delegation that went to Norway.  She was on the Planning Committee for the 33rd International World Championship in Midland, Ontario, and was the playing Captain of the Canadian Ladies Team.

2015 Myrna was part of a delegation that went to Norwich, England and represented Canada at the ISA Championship at Clearwater.

2014-2016 served as CNSA Past President.  She also was Captain for the Ladies Team Canada at the ISA in St. Cloud.

2016 became the ISA President, and achieved her 35 points with Partner Roy Babcock.  Myrna says Coldwater will always be special, she got her first and 35th point there.  Coldwater is always special because of the great meals, camping camaraderie of the event –  and the Biltons are a big part of the love and laughter shared by all OSA players.

It gives me great pleasure to present the newest, very deserving, OSA HOF Recepient, my friend, and your friend, Myrna Bilton.

This entry was posted in Uncategorized. Bookmark the permalink.